9 Juicy Copywriting Samples to Feast Your Creative Brain On!

Who remembers the Balboa training montage in Rocky 1?

You haven’t lived if you’ve not witnessed the solid three minutes of Sly Stallone pounding the pavement, overcoming obstacles, pushing boundaries and being the best, highly muscled version of himself.

And let’s not even get started on his victory dance at the end of the montage…you have to see it to believe it.

So what does Rocky Balboa have in common with copywriting? Truthfully, pretty much nothing. Except…we can learn a thing or two from his determination and use it to inspire our own.

Copywriting is a competitive business. It’s full of seasoned pros and up-and-comers waiting in the wings to snatch the copywriting heavyweight title from the top.

Don’t fear – as ever, we’re fighting your corner.

Now you’re pumped from seeing Rocky do his thing, here’s a gathering of the top juicy creative copywriting examples out there to keep the inspiration flowing.

Let’s start with good old Jack Daniels. One of my all-time favourite brands, whose brilliantly-crafted copy never fails to conjure up potent images of the Deep South and its rustic, homely vibe.

Never been there myself. But after reading a Jack Daniel’s billboard ad on the wall of a tube station, I always feel as if I have.

And the greatest thing about reading their copy, is that it genuinely feels like an old Southern gent from Tennessee is sitting down and talking directly to you. Not to everyone. Just you. It could even be Jack Daniels himself.

Their copy is always brimming with personality. And that’s what makes us readers connect with it emotionally, remember it, love it, talk about it and buy the product.

I absolutely love these simple, powerful copywriting samples by Gymit, mainly because they’re tailor-made for the average Joe.

Instead of using the usual pics of unattainably toned or ripped hunks and supermodels, with a cliche’d ‘you can be like this’ type of headline – they tap into the mind and emotions of real people.

People like you and me. Who know we might well cancel our gym membership after a few months, and are hence worried about getting ‘locked in’. And who like to reward ourselves with a greasy treat after a tiresome work out, instead of lettuce and a protein shake.

The humour’s great. The message is powerful. And the brand will stick to your mind like gum to a shoe.

I’m a massive fan of short sentences. Always have been. Always will be.

Why, you ask? Because they’re just so darn punchy!

And the copywriters down at Tesco have done an amazing job of illustrating this.

But of course not every brand or business should cut their sentences down this short (as you’ll soon see from our next copy sample). It all depends on what you’re trying to sell, who your target audience is and what tone of voice is most suitable and effective.

Companies that are a little more sophisticated or corporate, for example, may need longer, richer and more eloquently formulated sentences.

Now pause for a second and think about your own copy.

Can you cut down any of the sentences to make them pack a more powerful punch? And would this be an appropriate style for your specific target market?

If so, this copywriting trick which will work like a treat. Trim the fat and serve only the meat.

Another cleverly thought out sample of copy here. This time for the more ‘sophisticated’ reader.

What’s great about this ad is that it oozes exclusivity. It’s targeted at a more intellectual kind of audience, and makes them feel all high and mighty for being so.

And at the end of the day, who’s going to read this poster and think ‘Nope, it’s not for me! I’m too much of a simpleton to read a poster that’s more than 8 words!’?

No way. Most people would much rather chuckle at the ‘in-joke’ and give themselves a pat on the back.

So while slightly obnoxious it really does an excellent job of selling The Economist to anyone who considers themselves smart (like me).

This is a glowing example of copywriting at its best, with a unique personal touch that draws in the reader in a witty way.

The unexpected swerve in the middle where they stop mid-sentence is genius. You think they’re getting into the hard-sell, when…’Screw it. Forget all that.’ If this copy can teach us one thing it’s to veer from the expected course and throw readers for a loop.

Take note of how it inspires action at the end, and leaves you with the long-lasting feeling that this brand is simply awesome.

Sample 6: Porsche (written by us!)

You didn’t think I’d leave out one of our very own samples of copywriting brilliance, did you?

This is evocative copywriting at its best. Everyone likes to indulge in a spot of nostalgia and reminisce about their youthful dreams. How often have you heard a real life grown up wistfully say ‘My first car was a [insert any old banger here]’?

Likewise, most grown ups love to chat about their dream car. It’s the gift that keeps on giving.

P.S. Check out more of our copywriting samples and case studies, if you fancy a gander. 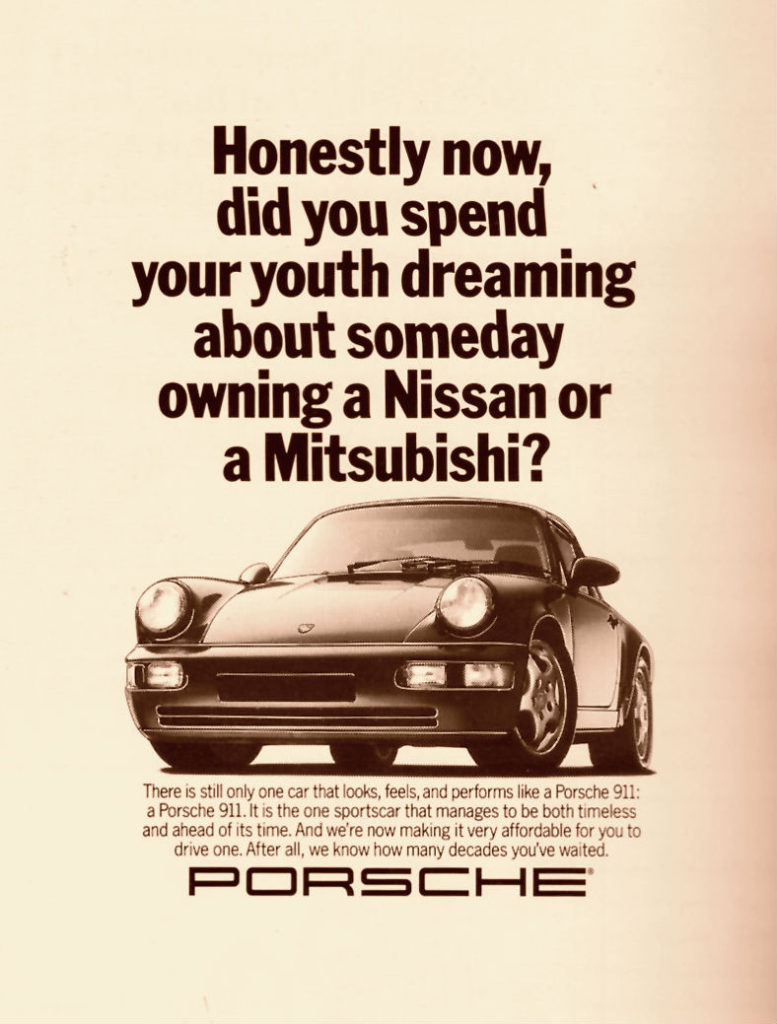 If you want to see a pretty damn clever example of how to respond to a potentially catastrophic crisis…this is the one for you.

Instead of curling up in a hole they came back with this witty advert, that incorporates a play on words with their brand name to apologise to customers…‘Fck, we’re sorry’.

I know, I know. Another car advert. But if you believe that honesty is always the best policy, then Volkswagen use this to their advantage with this fun-poking advert.

Known for their German reliability (not fancy convertibles), Volkswagen indulge in a little bit of harmless sarcasm for the release of their Up! Car.

It’s a refreshing little giggle at car advertising and the hyperbole that is synonymous with it.

Specialising in cough medicine may seem like a dry (ahem, sorry) subject. But that doesn’t mean they can’t put out a hilariously cheeky advertising campaign.

In 2014, Ricola launched a series of outdoor adverts that features scenarios where coughing would be inappropriate and most likely end in disaster for the coughee.

‘She’s (cough) just a friend’ just makes the statement look completely insincere, much to the amusement of readers.

So what could potentially be another ‘take this cough medicine to relieve symptoms of blah blah blah’ is now funny, brand-enhancing copy that engages potential customers.

While you’ll agree that these copywriters make this look easy, we know that it’s certainly far from it. You need to constantly hone your craft. Seek inspiration, search for killer copywriting examples and read as much new material as you can.

Last tip – don’t ever be afraid to get a little edgy. It can make the difference between selling out or fading out.

WANT TO LEARN THE ART, SCIENCE AND BUSINESS OF COPYWRITING – FROM A WORLD-RENOWNED COPYWRITING AGENCY?

Yes! Teach me your secrets!

WANT TO LEARN THE ART, SCIENCE AND BUSINESS OF COPYWRITING – FROM A WORLD-RENOWNED COPYWRITING AGENCY?

Yes! Teach me your secrets!

I have always liked the Jack Daniels ads, they are simple, understated and they induce a feeling of down home goodness. It still amazes me when I step back and take a look at the various ways advertising affects us all.

Most of us probably don’t even know how much advertising is affecting us on a daily basis. And yes – Jack Daniels copy hits the spot!

I still long for the old motorcycle ads and television spots from the 80’s. I still look them up on Youtube now and then to “relive” the excitement of what now is lackluster.

There definitely are plenty of them available to choose from when you stop and look around in magazines, billboards and other advertising mediums. The best ones always make you comment on them while the “middle of the road” pieces don’t generate anything which also means less sales.

Thanks for your comments guys. Good to know I’m not the only one who gets excited looking around at all the new billboard and poster ads!

Thanks Konrad! The newest ads really push the limit of what various companies are trying to achieve. The automakers seem to always have the best ones.

Glad you enjoyed the post Francis. I enjoyed writing it!

Few words that hits the bum of the readers sure do nail more sales than salsey USPs. 🙂 Love reading this!

Glad you enjoyed it Vergielyn. Come back for more 🙂

Reply
Pingback: How to write Wordpress copy that converts - CleanCoded.com

I love the article.

This site uses Akismet to reduce spam. Learn how your comment data is processed.

Tone of Voice in Communication: Are You Giving Out the Wrong Impression?

Why you should be worried about your competitor’s brand voice